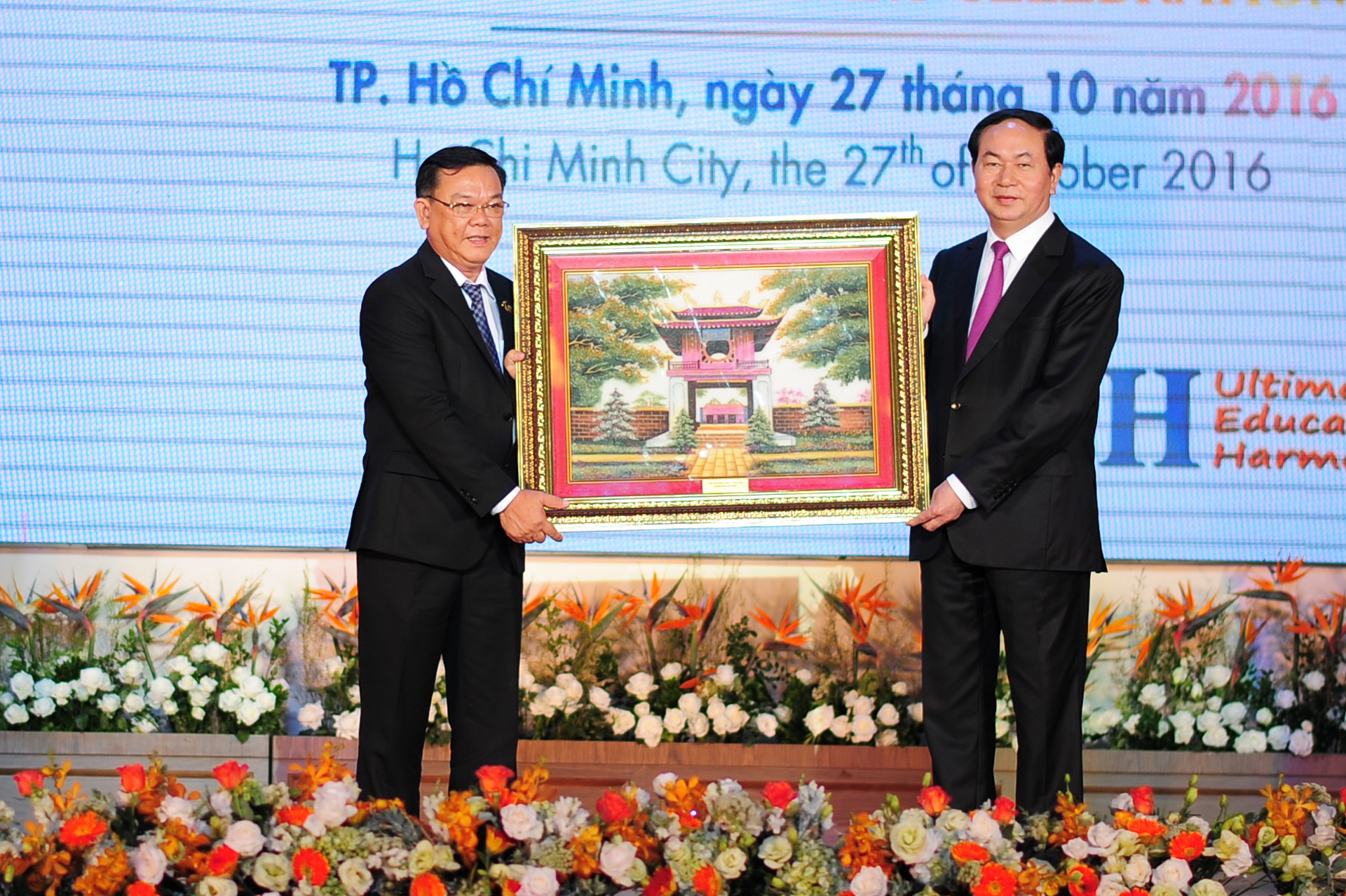 In the morning of Oct 27, 2016, at 59C Nguyen Dinh Chieu Campus, Ward 6, District 3, the University of Economics Hochiminh City (UEH) warmly celebrated its 40th Anniversary (Oct 27, 1976 - Oct 27, 2016). Throughout 40 years, UEH has matured and developed continuously with many great contributions to the country's socio-economic development. The celebration was also attended by leaders of universities, insitutes as well as of joint-training institutions from Quang Binh to Ca Mau provinces. Especially, UEH was pleased to welcome the delegation of 11 leaders and former leaders from the National Economics University, led by Prof. Dr. Tran Tho Dat, Party Committee Secretary and President of the National Economics University. It represented 25 years of close friendship between 2 universities of economics in the North and South of the country. In addition, there was the presence of more than 200 representatives from corporations, businesses, banks, economic organizations that have partnerships with UEH; and more than 60 journalists from media agencies to attend and report on the event.

On the UEH's side, there was the participation of many current and former leaders of UEH as well as more than 1,000 officials, lecturers and students of all generations. The celebration was broadcast live on ueh.edu.vn, Youtube (UEH Channel), Facebook (DHKT.UEH) to communicate widely for generations of UEHers. During the celebration, the story of 40-year-old UEH was told through 4 video clips:

The proud achievements of UEH during 40 years of development were the result of continuous effort of many generations of lecturers and students. At the anniversary celebration, the University honored 40 lecturers and officials with outstanding contributions to UEH. To recognize the contributions to the local governments in general and to Hochiminh City in particular, on this occasion, HCMC People's Committee decided to award the Traditional Flag to UEH. And in the occasion of the Anniversary, UEH also had the honor to be awarded the emulation flag by the Government, considered as a leading institution which successfully completed its duties. In order to celebrate the UEH 40th anniversary in 2016, UEH had had a series of activities not only to combine all the family members of UEH but also to position UEH through scientific and academic activities, promoting the image of a leading university in Vietnam reaching the international level.


This celebration was the last event to close a meaningful and eventful year. Over all, under the roof of University of Economics Ho Chi Minh City, the development has always been accompanied by support and a sense of unity to make the university soar high.

Media coverage of the event:

Source: The Organizing Committee of the 40th Anniversary